12th European Film Festival Integration You and Me is visiting the European Parlament for the third time. This time the review of festival's films enriches the programme of The ENIL Freedom Drive 2015. It's an European-wide meeting of activists working for improving life of people with disabilities. Today, 30th September 2015, a few hundreds of The ENIL Freedom Drive 2015 participants and supporters, will take part in the presentation of The EFF Integration You and Me in European Parlament in Brussels. 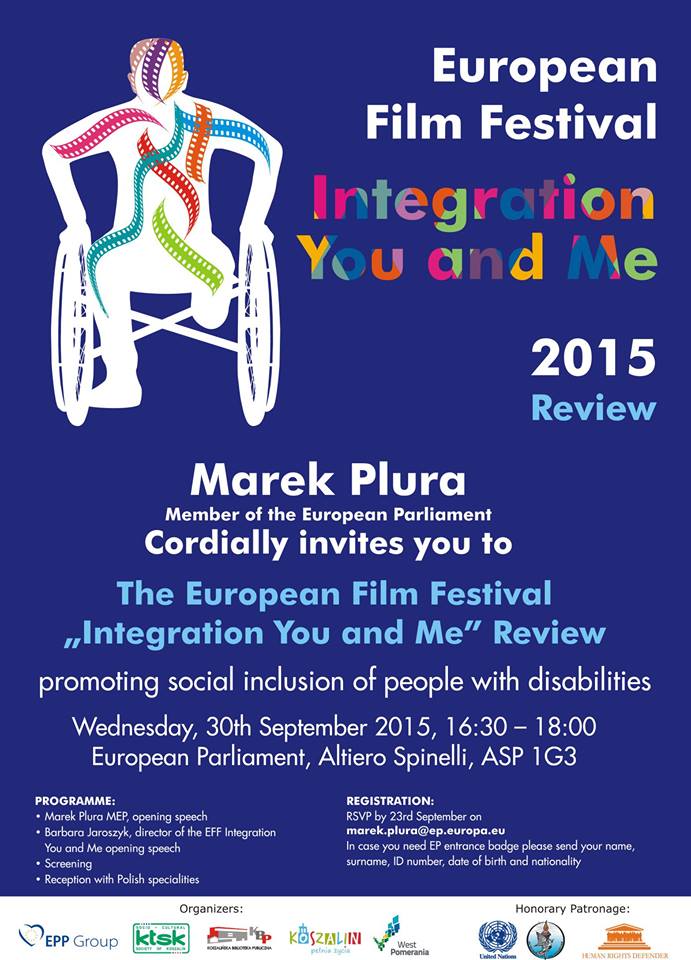 The European Network on Independent Living (ENIL) is a Europe-wide network of people with disabilities, with members throughout Europe. ENIL is a forum for all disabled people, Independent Living organisations and their non-disabled allies on the issues of Independent Living. ENIL represents the disability movement for human rights and social inclusion based on solidarity, peer support, deinstitutionalisation, democracy, self-representation, cross disability and self-determination. ENIL promotes equal opportunities for disabled people and fights against discrimination in Europe. ENIL addresses the under-representation of persons with extensive disabilities in European disability and social politics, as well as in mainstream society.

Every two years ENIL organizes The ENIL Freedom Drive, gathering hundreds of activists. FD meetings, held in Strassbourg until 2013 and for the first time in 2015 in Brussels, are a space for discussions, exchanging experiences and increasing awarenes about independent life of people with disabilities.

Freeedom Drive 2015 takes place from 29th September to 1st October. The theme for this year’s event is: The Next Independent Living Generation! As in previous years, the Freedom Drive will provide an opportunity for participants from across Europe to meet with Members of the European Parliament and to discuss issues affecting their lives. The issues that will be discussed include: deinstitutionalisation, personal assistance, inclusive education, employment, portability of Independent Living services across the European Union (EU) and the implementation of the UN Convention on the Rights of Persons with Disabilities in the EU. Other events that will take place include a march to the European Parliament, an international conference, the ENIL General Assembly and social events. The programme includes, among others, the following points:

12:00 March to the European Parliament
16:30 European Film Festival – Integration You and Me - the review

The review will present two competing films from the 12th EFF Integration You and Me (documentary film "Szpila", dir. Ewa Golis, Poland; feature film "Four Deaf Yorkshiremen go to Blackpool", dir. Charlie Swinbourne, UK), followed by the documentary film "12 meetings with the Butterfly" about the festival itself.

European Film Festival Integration You and Me is visiting the European Parliament for the third time, and the second time thanks to the invitation of MEP Marek Plura.