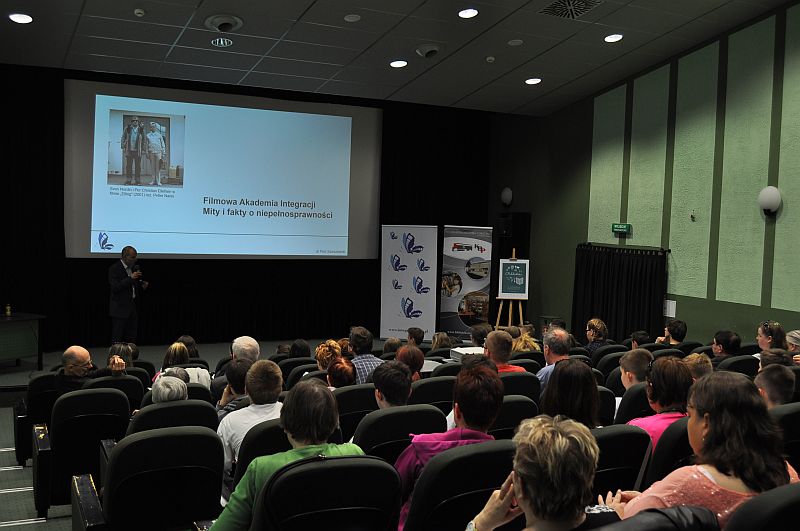 There have already been twelve meetings during this year's edition of Integration Film Academy. They have been organised as a part of 13th European Film Festival 'Integration You and Me' whose leitmotif is 'Sport Champions, Life Champions'. The Academies took place on 17th February, 15th and 23rd March, 5th and 19th April, 10th and 24th May, 7th and 13th June, 19th October and 7th, 8th November in Alternatywa Cinema in Koszalin. The meetings were attended by the students from Primary School no. 3, Primary School no. 4, Junior High School no. 3 and Junior High School no. 11, 6th High School in Koszalin, School Complex no. 10, School Complex no. 11, as well as the clients of 'Przyszłość' and 'Odrodzenie' Centres for People with Special Needs in Koszalin, the participants of Occupational Therapy Workshops no. 1 and no. 2 in Koszalin and the blind and the visually impaired readers of the 'speaking books' from Joachim Lelewel Koszalin Public Library, the students of Romuald Traugutt Air Force Training Centre in Koszalin. We also invited the President of Stowarzyszenie Rannych i Poszkodowanych w Misjach Poza Granicami Kraju (Association of the Injured and the Victims in Missions Abroad), the director of Penitentiary in Koszalin and the President of Culture Council by the President of Koszalin.

The audience has watched such films as 'This is not the end of the road' by Robert Czyżewicz, Jarosław Frankowski, Sebastian Korczak, 'The Second Life' by Sylwia Michałowska, 'Escape from Freedom Cinema' by Wojciech Maraczewski, 'The Eighth Day' by Jaco Van Dormaela, 'Vincent Wants to Sea' by Ralf Huettner, 'Elling' by Petter Naess, ‘Life Freestyle’ by Adam Palenta, ‘Olympians’ by Jerzy Jernas, ‘Secret Garden’ by Agnieszka Holland and ‘The Girl From the Wardrobe’ by Bodo Kox.

The meetings have also been attended by outstanding sports people - Hubert Wyszyński, Grzegorz Lanzer, Maciej Sochal, Tomasz Majewski, Paweł Spisak, Romuald Rasiak. Each film screening has been preceded by an introduction by Piotr Szarszewski, PhD of the Technical University of Koszalin. In addition, there have been special screenings with audio description for the blind and visually impaired. Each meeting has helped the audience to understand that disability is not an obstacle to achieve a success.